(Finally) Back for the Future (hopefully)

It seems we may have a “new Amiga” in the market! Well, it’s a new motherboard, capable of running AmigaOS 4.1, and it’s called Sam440ep. It’s actually available to purchase on the Net!

I would have liked to see a trully new Amiga; I mean a full computer, with a name, and a distinctive case. More like a Mac than a PC. Relec have done something like that with The Red One. If you know Amiga’s history, you won’t be asking why Amiga Inc. haven’t done that themselves. Still, I think this opens up a lot of space for Amigans to build their machines in special/custom/modded cases and brag about it!

I know it’s been years since news like these made a significant impact on the market, the Amiga today being mostly regarded as a very small niche market of people holding on to old hardware. But an Amigan is always an Amigan, and we have a reputation of being clever, inventive, innovative, rebel and fun geeks. The AmigaOS has always been a reflection of this status: a simple, out-of-the-ordinary, highly efficient, yet powerful operating system. 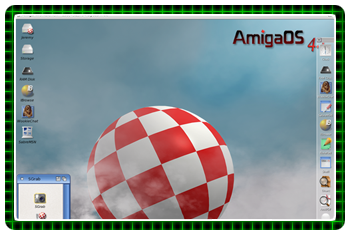 Hyperion seem to have done quite a remarkable job with the AmigaOS up until now (Ars Tecnica seems to think so too), and we finally have something to run it! Plus, we also have AROS running on the Sam, and some Linux flavours.

(Maybe Pedro Gordinho can give us his artistic vision of the new Amiga?! I’ll post it should he find the time to do it.)

I look forward to having an Amiga again! And Christmas is just around the corner…